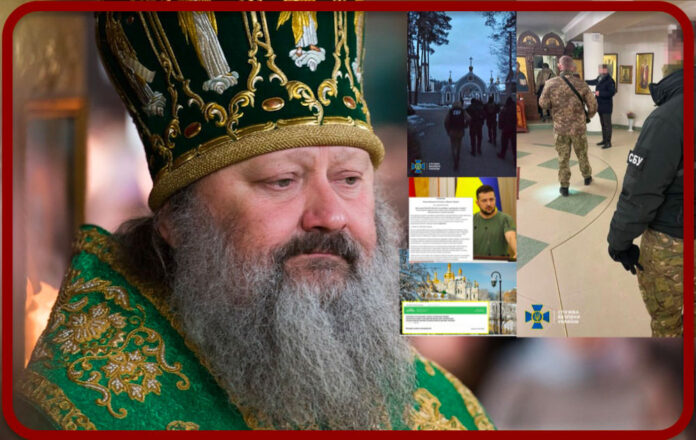 As of 13 June, we brought to the reader’s attention the fact that Kiev was pushing the Ukrainian Orthodox Church of the Russian rite to leave Moscow, but already on 23 May, three quarters of the clergy of the diocese of Zaporizhzhya, which is located in Ukrainian-controlled territory, were in favour of maintaining unity with the Russian Orthodox Church.

A choice that is costing them a lot. In humanitarian, economic, political terms. As of 23 November, a bill was introduced in the Rada to ban the Russian Orthodox Church and its religious organisations in Ukraine.

In the meantime, searches have begun. The SBU reported that “counter-espionage measures” on the premises of the Ukrainian Orthodox Church had been completed and “pro-Russian literature” had been found. On 23 November, the Security Agency conducted searches in the Kiev-Pechersk Lavra and other facilities of the Orthodox diocese – the Holy Trinity monastery in Koretskyy and the Sarnensko-Poleska diocese in the Rivne region. The SBU and police searched 350 church buildings. 850 people were searched and 50 were subjected to ‘extensive counter-intelligence interrogations’, including polygraphs.

The Ukrainian social sphere reads: ‘Among them were not only Ukrainian citizens, but also citizens of the Russian Federation. Some of them presented passports and military cards of the USSR during the document check, others had no original documents or had passports of Ukrainian citizens with signs of forgery. During the search, ‘pro-Russian literature’ was found, which was allegedly used in seminaries and parochial schools. In addition, cash in the amount of more than 2 million UAH, more than 100 thousand US dollars and several thousand Russian roubles were found’. The inspections at the Pechersk Lavra in Kiev were confirmed by the secretary of the National Security and Defence Council of Ukraine, Oleksiy Danilov.

According to Metropolitan Anthony, head of the Moscow Patriarchate’s Department for External Ecclesiastical Relations, the searches in the Kiev-Pechersk Lavra are a crass attempt by the Ukrainian authorities to interfere in the life of the Church, and are part of the fight against all things Russian. As of 29 November, the canonical Ukrainian Orthodox Church is banned in the Lviv region.

Not only do we learn from social sources that SBU spokesman Andrey Yusov stated that the SBU detains priests in order to exchange them for Ukrainian prisoners. “The reason for the SBU’s searches of Orthodox churches and monasteries in Ukraine is now known. It has emerged that the Kiev regime wants to exchange, among others, detained Orthodox priests with captured Ukrainians.”

“Kiev,” reads the telegram post, “accuses the clerics of collaborationism, claiming that they are using the dioceses as cells of the ‘Russian world’. For example, searches have already been carried out in some monasteries in Ukraine. And in the Lviv Oblast, canonical Orthodoxy activities have allegedly been banned for reasons of state security’.

On 30 November, attacks on the Orthodox Church in Ukraine continued. On the social sphere one reads: ‘The destruction of the religious pillar as the last thread that binds our countries is not a new process. And it started long before the war. Only now has it taken on hypertrophic proportions. And if before, churches and monasteries were squeezed by the hands of ‘racketeers’ in tracksuits, now it is the state that officially takes care of them’. Among those raided was the monastery of St Cyril and Methodius near Mukachevo. On 1 December, the SBU states that during the search of the Cyril and Methodius monastery in the Mukachevo diocese, a large amount of agitation and propaganda material was found.

Most of the literature is authored by Russian figures and published by Russian printers. Thus during the events, the SBU allegedly found texts glorifying the Russian land and calling for the ‘awakening of Mother Rus’, the agency said.

Also on 1 December, it was reported that the priests of the Ukrainian Orthodox Church, who were detained during the searches in the Kiev-Pechersk Lavra, could be included in the exchange lists from Ukraine, Andriy Yusov, a representative of the Ukrainian Defence Ministry’s main intelligence directorate, said on 30 November.

On two December, the SBU monitored Moscow Patriarchate facilities in three regions. Security forces conducted searches in monasteries in the Transcarpathia, Zhytomyr and Rivne regions. The SBU is checking whether the religious objects are being used as centres of the ‘Russian world’.

On the morning of 2 December, Ukrainian Prime Minister Volodymyr Zelensky promulgated the decision of the National Security and Defence Council to ban the Moscow Patriarchate in Ukraine.

The relevant decree on the detailed study of the activities of the Russian Orthodox Church and the application of sanctions against it was published on the website of the Office of the President. Zelensky also instructed the Council of Ministers to draft a bill banning religious organisations affiliated with centres of influence in Russia.

In the early afternoon of 2 December, the National Security and Defence Council imposed sanctions against the abbot of the Kyiv-Pechersk Lavra Pavel (Lebed) and former MP Vadym Novynskyi. Source RBC-Ukraine from law enforcement sources. The official notes state that Ukraine’s security service carried out ‘counter-espionage activities’ in monasteries in the Zhytomyr, Rivne and Transcarpathia regions. Zelensky implemented the decision of the National Security and Defence Council of Ukraine on restrictive measures against representatives of religious organisations allegedly associated with Russia.

These measures will legitimise not only the searches and arrests of Russian Orthodox Church fathers, but also the looting of property and the expropriation of assets.

The SBU on two December carried out searches on the territory of nine Ukrainian Orthodox Church sites in the regions of Zhytomyr, Rivne and Zakarpattia.

The events are held in cooperation with the National Police and the National Guard “as part of the systematic work to counter the subversive activities of the Russian special services”. The Metropolitan of the Kirovograd diocese of the Canonical UOC is accused of subversive activities. The Ukrainian Security Service stated that the Metropolitan was part of Patriarch Kirill’s inner circle and coordinated with him to ‘spread pro-Kremlin views’.

The Ukrainian President’s website published a decree on the introduction of sanctions following the decision of the National Security and Defence Council on 1 December against Metropolitan Pavel, Vicar of the Kiev-Pechersk Lavra, and some UOC hierarchs from Crimea, Donbass and Sumy region. The sanctions include the freezing of assets and bank accounts, deprivation of state honours and other measures. PCU representative ‘Archbishop of Chernihiv’ Evstratiy Zorya said that the Lavra’s status as a PCU monastery had already been registered. “On 1 December 2022, the statute of the Lavra of the Holy Dormition of Kievo-Pechersk (male monastery) of the Ukrainian Orthodox Church (Orthodox Church of Ukraine) was registered. Information on this legal entity as part of the local Church was entered into the Unified State Register on 2 December,’ he wrote.

At 6:40 p.m., it was reported on the social sphere that the Kyivan-Pechersk Lavra had been re-registered to the autocephalous Orthodox Church of Ukraine with the support of the Ukrainian authorities, said a representative of the PCU, Evstraty Zorya. Metropolitan Epiphanius will become the new head of the Lavra. 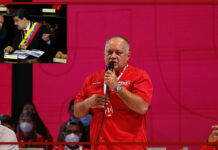