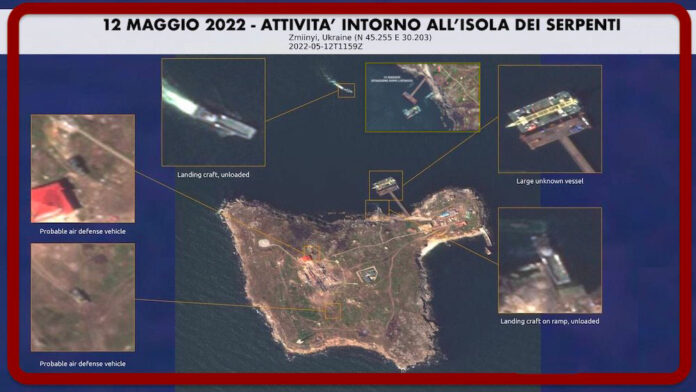 The head of the Ukrainian Defence Ministry’s main intelligence directorate, Gur, Kirill Budanov, gave the news. He said that the Ukrainian armed forces would continue to ‘fight for Snake Island’ even though they had now failed to take it. He continued: ‘We will do so because it is of strategic importance for the region and for both sides of the conflict’. Budanov explained ‘that this is the only region through which the Russian armed forces can attempt to land troops on Transnistrian territory’ and further said: “Whoever controls the island can at any time block the movement of civilian ships in all directions to southern Ukraine”.

Russian control of the island is also confirmed by satellite images from 12 May, where Russian air defence systems are visible on the island, two landing ships and a floating crane of the Black Sea Fleet. The S-300 air defence system has been deployed in the neighbouring area: in Zheltyy Yar, up to five helicopters have been deployed to airfields allowing them to operate in the island’s airspace. In the adjacent area, increased UAV activity is again noticeable (one Bayraktar was shot down on 12 May). In addition, up to six Ukrainian vessels operate in the coastal area. There is every reason, according to Russian social accounts, to expect a new Ukrainian attack attempt on the island.

According to social sources, the Odessa ports are of crucial importance for the control of the Gulf of Odessa. The unblocking of the Odessa ports is necessary in order for Ukrainian grain and oilseeds to be exported to the West. The capacity of the railways does not allow this problem to be solved in an acceptable timeframe.

The attempt to retake the island from the Russians was planned and implemented in the days leading up to the Russian parade day on 9 May Moscow, intended to be not only a reconquest but also a strong gesture against Putin. But something went wrong. It seems that Zelenskyj signed it, but according to the TASS news agency source, it was British advisers who wanted it, contrary to the decision of the leadership of the Ukrainian armed forces. The Ukrainian General Staff was against the operation and understood that it would lead to major losses. But the Ukrainian leader was interested in the ‘media’ result by 9 May. According to social, Ukrainian and Russian sources, a lieutenant colonel of the US Marine Corps and a major of British commandos, of whom there are no reports, were with the crew. There are no sources to deny or confirm this hypothesis.

Stepping back on 10 May in his brief, Russian Defence Ministry Spokesman Igor Konashenkov stated: “Ukraine lost 14 planes and helicopters while trying to capture Snake Island; another Ukrainian unmanned aerial vehicle ‘Bayraktar-TB2’ was shot down by Russian air defence systems this afternoon; Ukraine’s attempt to seize Snake Island was militarily useless; three Ukrainian ‘Centaur’ amphibious assault boats with amphibious assault humans on board were destroyed in the Snake Island area; the Kiev regime’s ill-considered public relations campaign to seize Snake Island on the eve of Victory Day ended in disaster for the Ukrainian armed forces. In the days that followed, there was talk of corpses being found on the island until 13 May when the number one Gur admitted to the failed attempt. On 11 May, the Ukrainian Defence Ministry confirmed the destruction of the Mi-14PS naval helicopter of the 10th Airborne Brigade by a Russian fighter jet in the Zmeinoye area. The combat vehicle was shot down during an attempt to land on the island.

According to a Ukrainian social account, things went a little differently from what the Russians reported: on Serpent Island, high-ranking British and American officers disappeared during the landing. The Ukrainian army fought for two days. But it was not possible to recover the officers, or at least their bodies. According to a source at the General Staff, a lieutenant colonel of the American marines, as well as a British major of the naval commandos, landed on the island of Zmeiny (of the Serpents) together with Ukrainian soldiers. They coordinated the work of NATO intelligence resources and Ukrainian landing forces. Both officers landed in the first wave. But then the Russians shot down three helicopters and a landing craft was sunk. The remaining boats withdrew, leaving the first wave on shore.

According to our source, London and Washington asked Zelensky to make every effort to recover their officers. Despite numerous attempts to land on the island, the fate of the British and American marines could not be discovered. It is assumed that they died in battle with the Russians. But so far, as the Ukrainian source says, there is no confirmation of this information. It is possible that both were captured. In turn, the attempt to recover the landings cost the Ukrainian forces several downed planes and helicopters, as well as several dozen dead marines and special forces.

According to the FAN news agency, there were numerous failed attempts to seize Snake Island on the eve of 9 May, according to Russian Defence Ministry data. The Ukrainian armed forces repeatedly launched amphibious air and sea assaults, but were repelled by Russian forces. In total, over 50 Ukrainian soldiers were killed and three Su-24 bombers, one Su-27 fighter, three Mi-8 helicopters with paratroopers and a Mi-24 fighter transport were shot down. Also on the night of 8 May, the Russian Armed Forces sank three Ukrainian Centaur boats carrying paratroopers. The Ukrainian Armed Forces also lost 30 UAVs, nine of which were Bayraktar TB-2 attack drones, while attempting to capture Snake Island. In addition, the six Mi-8 and Mi-24 helicopters involved in the operation were destroyed on the ground near the village of Artsiz in the Odessa region. On 11 May, a FAN article read: ‘Today the Russian military found three more Ukrainian bodies washed up on the shore. Now 27 bodies of Ukrainian special forces and nationalist fighters remain on Serpent Island as a result of Kiev’s failed operation,’ said Russian Defence Ministry spokesman Major General Igor Konashenkov.

For military expert Viktor Litovkin, ‘the capture of Snake Island was not only an attempt to make Russia ‘thumb its nose’ on the eve of 9 May but, the Ukrainian armed forces also wanted to show who owns the Black Sea. According to him, the small island is strategically important because it allows them to control the mouth of the Danube and the road to Odessa and Kherson. All goods traffic to Odessa was under the control of the people on the Island of Serpents. And not only in Odessa, but also in Romania, Hungary, Austria and Germany. The island was therefore of great operational and strategic importance. But to make a landing attempt when the Russian Air Force and the Black Sea Fleet were already in control of it was madness. Ukraine was unable to secure the capture of the island even by the best-trained special forces. That is why it was first a political and then a military adventure, which ended in total failure,’ the expert commented.

Also according to the Russian version: ‘The presence of Western instructors in the Ukrainian government and army cannot be denied,’ Litovkin emphasised, ‘the Ukrainian leadership has already come to terms with it and does what it is told (…) I cannot think that there are no foreign instructors. You have to understand that Ukraine is a colonial country controlled by the US, UK and Nato instructors. Therefore, they are certainly present at every stage of the army and presidential administration. They are both advisors and instructors. They very actively influence the decision-making process of the army leadership and the president. The generals of the Ukrainian Armed Forces are forced to obey these instructors, they have no other choice,’ the Russian military expert concluded. 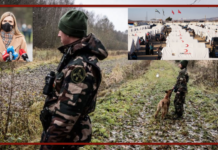