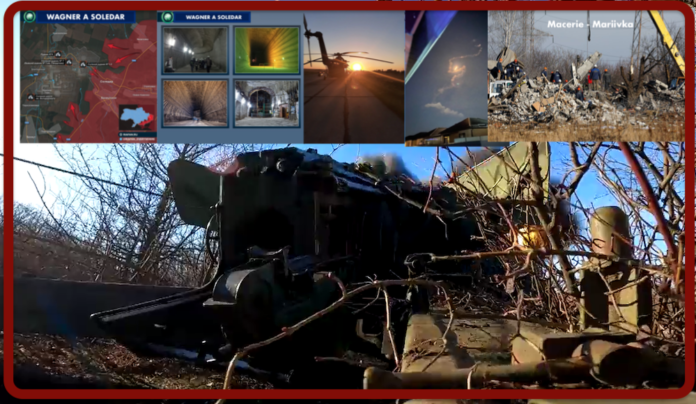 In the Russian social sphere in these two days, attention is focused on the Ukrainian attack on the school complex on 31 December where 89 Russian mobilised soldiers were killed. What emerges from an initial reconstruction is that the mobilised soldiers moved into the vocational school on 18 December according to the order of higher commands. According to information from Donetsk, the commander of the regiment on that tragic night was urgently looking for a new location, Lieutenant Colonel Bachurin, the deputy commander, and the head of one of the services, a senior lieutenant, remained in the building. And they died.

Documents on the protection and defence of the facility were also lost. For a fortnight of deployment, the Ukrainian special services had enough time to study the location, composition of the unit and calculate the exact coordinates of the attack.

According to military analysts, Russian generals in the most difficult circumstances speak out of turn and above all emphasise that they are not at the front and do not understand the complexities of war. One account in particular writes: ‘They talk to us about mobile phones, each time demonstrating their stupidity and lack of understanding of what is happening in the army, where EVERYONE has phones. Also, where the radio connection fails, artillery fire is often corrected by phone. There is simply no other way. For example, in one of the departments I was in, there was a stable connection only with artillery, but now it was only possible to call XXXX by phone. They explained to me that to communicate by radio you need a repeater, but there is none. There are places in the NVO where no mobile connection simply takes, but Himars fly there too. How will the generals explain this to us?”

The Ministry of Defence has officially announced the death of 89 soldiers in the Makiivka vocational school. The official explanation of what happened is as follows: ‘At zero one minute Moscow time on 1 January, six rocket launchers of the Himars multiple launch system were fired by AFU artillery at a temporary deployment point of a Russian military unit near the Makiivka settlement. Two of the rockets were intercepted by on-duty air defence assets. Four rockets with high-explosive warheads hit a building where the Russian military was located. The detonation of Himars projectiles caused the floor of the building to collapse. Immediately after the tragedy, the unit commanders and officers, junior commanders and soldiers of other units took all available measures to rescue the victims. First aid was rendered and the injured were evacuated to medical facilities. Unfortunately, during the removal of the rubble from the concrete structures, the number of our comrades killed rose to 89. Lieutenant Colonel Bachurin, deputy commander of the regiment, was among the fallen’.

According to the Russian authorities, ‘the return fire of a multiple-launch rocket launcher, from which the Ukrainian armed forces were firing at Makiivka, was destroyed. In addition, missile and air strikes on a group of military equipment near the Druzhkivka railway station in the Donetsk People’s Republic destroyed four more Himars multiple-launch rocket launchers, four MLRS RM-70 Vampire vehicles, over 800 rockets, eight vehicles and over 200 Ukrainian nationalists and foreign mercenaries. In addition, a temporary deployment site of one of the Foreign Legion units near Maslivka was hit, where more than 130 foreign mercenaries were killed. A commission is currently investigating the circumstances of the incident. But it is already clear that the main cause of the incident was the inclusion and mass use, contrary to the ban, of mobile phones by personnel within range of the enemy. This factor allowed the adversary to track and determine the coordinates of the soldiers’ position for a missile attack. Measures are now being taken to prevent such tragic incidents in the future. Following the results of the investigation, the responsible officials will be held accountable.” First Deputy Chief of the Main Military Policy Directorate of the Russian Armed Forces Lieutenant General Sergey Sevrukov.

While the controversy between the base and the Defence leadership, Sergei Shoigu will have to report to Persident Vladimir Putin on 1 February about this and more, Ukraine is getting new rules for registering military personnel. Diplomatic agencies will keep military records of Ukrainians abroad and facilitate their return to Ukraine during mobilisation. According to Ukrainian Foreign Minister Kuleba: ‘Preparations for the transfer of Patriot systems to Kiev have already begun, they should be deployed as soon as possible’.

Not only Kiev says that from now on it may not have time to warn Ukrainian citizens of the new offensive by Russian troops. This was said on live TV by Deputy Defence Minister Anna Malyar. According to the deputy minister, “it would not be correct to ensure the warning of a new large-scale offensive. Because the enemy has so to speak different scenarios and is guided by the situation. They make decisions even in the last hours and those who execute them do not know a day in advance how, where and what decisions will be executed,’ Malyar explained.

According to the social sphere, the Russians are waiting for the ice to march on Kharkiv to cut it off from Kiev to prevent Ukrainian troops in the Donbas from advancing westwards to help the capital. While an attack on eastern Ukraine by the Russians could take place to cut off arms supplies to the allies.

Coming to the front line, the Russian army is advancing on Bachmut and attacking near Liman and Adviika. They are moving forces in the direction of Vuhledar from the direction of Kherson. The assault teams of PMC Wagner have advanced significantly in Soledar over the past few days and have almost reached the famous Artemsol mines. These facilities may prove to be a major obstacle to the advance of the Russian forces. There is a risk of an Azvostal 2. All mines are connected by an elaborate underground communications system, which the Ukrainian armed forces have improved. At the moment, the Ukrainians have huge, interconnected, fortified underground chambers several hundred metres deep under their control.

The mine system is used as an underground fortress: there the Ukrainian armed forces have personnel rooms, ammunition depots and in some places even equipment hangars.

According to posts in the Ukrainian social sphere, it seems that one hundred AFU soldiers were killed in Druzhkivka due to the placement of the military in one building, despite the orders of the commander-in-chief. There is a big scandal in the General Staff over disagreements between Zaluzhny and Syrsky, who was preparing the reserves for Bachmut.

Apparently, the Russians and Ukrainians equally have a problem with logistics management and despite the many attacks on the military’s shelters, both military leaderships insist on housing them barracks-style, making them de facto sensitive targets.

The Ukrainian army tried to attack in the direction of Kreminna on the 3rd evening, but were intercepted and then hit by artillery. After the attack, the survivors returned to their original positions.

On the morning of the fourth of January in Sevastopol ‘In the area of Fruktovoye the roar was such that the windows shook,’ wrote eyewitnesses. There was also a loud explosion near Soldatsky. Military defence forces came into action against Ukrainian attacks. The governor of Sevastopol, Mikhail Razvozzhayev, stated that the loud explosions that occurred above the city in the early hours of the fourth morning were the work of the Russian army. According to him, two drones were shot down over the sea near Belbek.

In the direction of Starobil’s’k Russian troops conducted attacks against concentrations of the Ukrainian armed forces in Dvorichna, Kupjans’k, Novoselivka and Tabaivka.

In the Donetsk direction, the Russian Armed Forces hit the positions of Ukrainian units in Avdiyivka, Marinka and Kurakhove.

In turn, the Ukrainian formations shelled civilian structures in Donetsk, Panteleymonivka and Yasynuvata with artillery guns.

In the Zaporizhzhya region, the Russian Armed Forces hit an infrastructure facility in Zaporizhzhya during the night hours.

Russian armed forces hit Ukrainian targets in Kherson, in the southern sector of the front.

Also in the morning of 4 January the air raid warning resounded throughout Ukraine according to Ukropablik the Russian Federation’s A-50U VKS and Mig-31K took off in Belarus. The Russians according to military analysts are trying to deplete the air defence missile stocks of the Ukrainian armed forces with the help of continuous kamikaze UAV attacks.

Expected massive attack on infrastructure against Ukraine on 6-7 January spokeswoman of the ‘Southern’ operational command Natalia Gumenyuk said. “We expect the next missile attack in the area of the Orthodox Christmas,” she said.