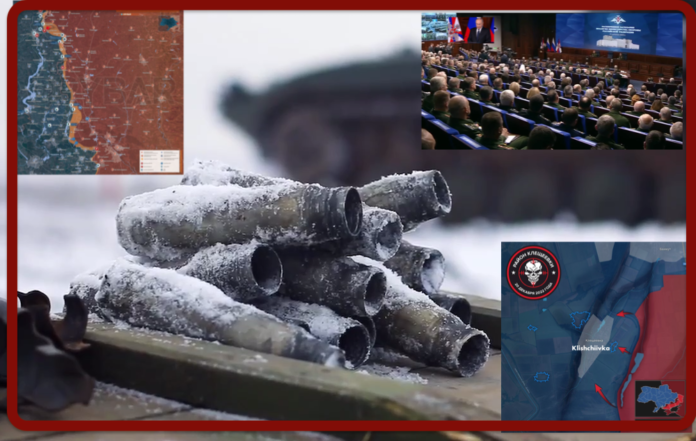 While the Ukrainian President, Volodymyr Oleksandrovyč Zelens’kyj, was on his way to the United States to address the US Congress, at 1pm Italian time on 21 December, the President of the Russian Federation, Vladimir Putin, spoke at the enlarged meeting of the Russian Ministry of Defence. His statements included: ‘A safe life for our citizens will be guaranteed in all territories of the Russian Federation, including the ‘new’ ones. Today the military capabilities and competences of almost all NATO countries are actively used against Russia. All information on NATO forces and capabilities is well known and should be analysed and used to build up the Russian armed forces’. The Russian president added: “The clashes have highlighted issues on which we must, as they say, work well; officers and non-commissioned officers who have gained experience with the ‘NWO’ must be appointed to new posts as a priority”.

Before the audience of generals and senior officials of the Russian Federation Putin explained: ‘The Ministry of Defence and the General Staff are in charge of analysing NATO experience and tactics and incorporating them into the army’s training and equipment programme. The combat capabilities of the Russian Armed Forces are increasing day by day, all the tasks of the SAF will be completed and the security of citizens in all Russian territories will be ensured. The development of military communications, automation and counter-battery warfare emerged during the SAO and must be intensified. The partial mobilisation carried out also highlighted a number of problems, in particular the need to modernise the system of military commissariats and to improve the system of weapons accumulation and storage. We have no funding restrictions for the army; Russia will continue to develop its military capabilities; the nuclear triad will be improved: it is a guarantee of our sovereignty’.

Still on the subject of weapons and fronts Putin said: ‘Yars missile systems continue to be supplied to troops; Sarmats will soon be deployed in combat and the Admiral Gorshkov frigate, equipped with the latest Tsirkon hypersonic missiles, will enter service. Officers and non-commissioned officers who have gained experience in the SSO are to be assigned to their new duties as a priority. The President thanked the soldiers and officers who participate in the SAS and all citizens who support the soldiers by sending vehicles, equipment and warm clothing to the front.” “There is no doubt that all our goals will be achieved (…) The whole country looks to the Russian Armed Forces, wishes you success, good luck, I have no doubt that all our goals will certainly be achieved.”

Finally, a minute’s silence was observed for all those who lost their lives.

Defence Minister Sergei Shoigu also took an active part in the extended meeting of the Defence Ministry College, stating that more than ‘20,000 people have joined the troops as volunteers’. “Kiev is resorting to prohibited methods, including terrorist attacks and contract killings, bombing civilians with heavy weapons. The Russian army in Ukraine is opposed by combined Western forces. Western countries try to ignore Kiev’s ‘nuclear blackmail elements’, including provocations against the ZNPP’.

“Revelations by Merkel and other politicians have shown that the Russian Federation is not behind the conflict in Ukraine. There are, according to the Russian minister, more than 500 US and NATO satellites working for the AFU, including more than 70 military ones. The total silence of the Western media on the war crimes of the Ukrainian army is the height of cynicism. There are NATO staff officers in the combat zone in Ukraine,’ he went on to say.

And again, ‘more than 25 countries have spent $97 billion on arms supplies to Ukraine, some of which are in the hands of terrorists and are spreading around the world. A partial mobilisation was carried out to ‘stabilise the situation, defend new territories and conduct further offensives (…) The mobilisation plans have not been implemented since the Great Patriotic War, so the Russian Ministry of Defence faced some difficulties. The partial mobilisation increased the combat capabilities of the troops and intensified combat operations. The Russian Ministry of Defence receives daily reports of Ukrainian nationalists shooting at Ukrainian troops who evade combat missions’.

Among the news Shoigu mentioned: ‘The sixth Dome spacecraft has been launched, which will allow continuous monitoring of missile-prone areas in the northern hemisphere. The brand new Project 955A ‘Borey-A’ submarine ‘Generalissimo Suvorov’ is adopted by the Russian Navy. Russian Armed Forces medics in the NWO area provide first aid to the wounded within 10 minutes, delivered to medical units within an hour. The nuclear forces of the Russian Federation successfully practised a massive nuclear attack in response to the enemy’s use of weapons of mass destruction during a special exercise’.

And now a look at what is happening at the frontline: an air alert across Ukraine as early as 11.39 a.m. on 21 December. MiG-31K fighters (carrying Kynzhal hypersonic missiles) and A-50U long-range radar detection and control aircraft flew over the skies over Belarus.

In the Rostov region of Russia, a ban on drones was introduced to avoid false alarms in the event of a drone attack from Ukraine.

Russian troops struck the Shebelen oil and gas refinery on the night of 20-21 December. The plant was located north of the settlement of Andriivka (Kharkiv region).

It is confirmed that the Shebelen oil and gas refinery was undergoing refining during the night. Shots were recorded. It is not yet known whether the plant was completely shut down: there were earlier sorties, but somehow the plant continued to operate in a limited manner.

The Ukrainian authorities report that the blackout in the Kiev region will last at least until 23 December. A disproportionate number of subscribers remain without heating. And the timing of the return to the planned blackouts is still unknown. The region will have to live with regular emergency shutdowns.

Since the late afternoon of 20 December, Wagner’s PMC units have been moving towards Klishchiivka, the AFU’s next difficult defensive node south of Bachmut.

The complexity of its assault is due to the difference in altitude and a developed system of strongholds around the village created by the Ukrainian military. Not only would the Ukrainians have prepared the village territory for a prolonged defence.

In Klishchiivka, communication passages were dug between houses, the ground was mined, fortifications and long-term firing points were created, and anti-tank hedges and other engineering obstacles were placed in the streets.

An important stronghold northwest of Klishchiivka is particularly difficult. It is located on an elevated site and provides good cover for both the village itself and the south-eastern part of the village, which is in a flat area. In addition, the stronghold is covered by a body of water on the north side of the village. Therefore, despite the relatively small size of Klishchiivka, one should not expect the assault to be an easy ride. But the fighters of PMC Wagner are ready.

In the direction of Starobil’s’k at 23:59 on 20 December, in the Kupjans’k-Svatove sector, Russian troops are conducting an offensive against the positions of the Ukrainian Armed Forces near Dvorichna and Petropavlivka. The 14th Ukrainian Brigade suffered losses during the fighting. To reinforce the positions in the vicinity of Syn’kivka and Berestove, reinforcements of the 3rd Battalion of the 14th AFU Brigade were deployed and an anti-aircraft missile system was deployed in Pervomais’ke.

On the Orlyans’ke-Yahidne line, units of Mechanized Brigade 92, Battalion 114 and Battalion 103 of the Tetra Defence Brigades have equipped observation posts. Small UAVs operate regularly from their posts.

On the Liman section, the Ukrainian Liman Battlegroup Command is preparing for a large-scale offensive on Dibrowa with the aim of further reaching Kreminna and the Svatove-Kreminna highway.

For the Makiivka-Ploshchanka-Terny line, formations of the 80th and 95th divisions of the AFU arrived. Mortar and artillery shells were delivered to Yatskivka. Su-27 and MiG-29 tactical aircraft of the Ukrainian Air Force are providing air support to ground troops from Mirgorod airport in the Poltava region.

The situation in the direction of Starobil’s’k is currently unchanged. Position battles and active counter-battery warfare with the use of helicopters and small reconnaissance UAVs are taking place all along the front. The Ukrainian Armed Forces are preparing for an offensive on Kreminna, building up an attack reserve in the rear in the Liman area. Meanwhile, on the Dibrova-Makiivka line, both Russian military and Ukrainian formations carry out regular attacks by exploiting gaps in the defensive lines.

In the rear, in the central regions of Ukraine, 28 Slovenian M-55S tanks of the newly formed 47th Mechanised Brigade are being re-equipped. The personnel are being trained in the use of Soviet-type equipment. 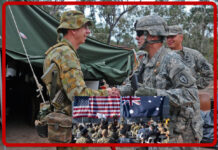 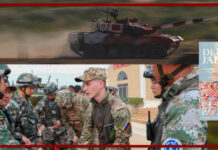 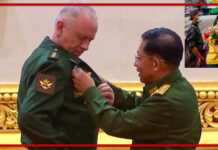