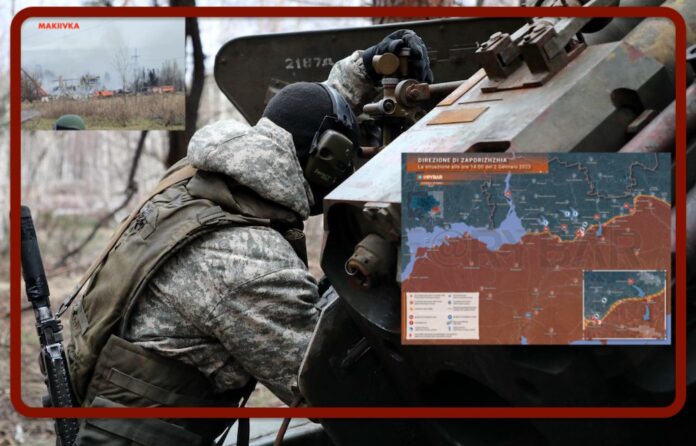 While the rest of the world celebrated the New Year with fireworks, in Ukraine, shortly after midnight the Ukrainian Armed Forces launched more than 50 shells in Donetsk, most of them in the city centre and the Kuybyshev district, hitting residential areas. In addition to the Makiivka complex housing Russian mobilised soldiers, the most important attack was on the Pervomaisk hospital in Luhansk

The Russians on the same night returned to strike what remained of Kiev’s industrial infrastructure.

At 14:00 on 2 January 2023, the situation at the front in the Zaporizhizhia Direction was as follows: in the Zaporizhzhya Direction, Russian soldiers secured the lines that had been liberated as a result of a local offensive. In the Polohivs’kyi sector, an assault on Ukrainian positions restored control over Dorozhnyanka. The Ukrainian formations retreated to the reserve lines, according to the social sphere there were 36 dead and wounded in the Ukrainian ranks. A Russian reconnaissance and sabotage group conducted a raid on Ukrainian positions north of Novopokrovka, eliminating three men at two observation posts.

In order to regain control, the command of the Ukrainian 65th Mechanised Brigade is planning a counter-attack from Zaliznychne with the support of the units of the 103rd Battalion of the 108th TRO on the Bilohir’ya-Charivne line. The 108th Brigade’s line of defence was rotated and additional Javelin anti-tank guided missiles were delivered.

The Orichiv sector received reinforcements from the forces mobilised in Shcherbaky, while units of the 108th Brigade of the Ukrainian Armed Forces Troops arrived in the vicinity of Yegorovka and Omelnik. Residents of the Ukrainian-controlled Zaporizhizhia region are spreading information about Kiev’s preparations for an offensive in the direction of Tokmak.

According to information from the social sphere, the Ukrainians shelled the centre of Makiivka and Donesk on New Year’s Eve. The vocational school in Donetsk Makiivka was hit by a HIMARS MLRS (two projectiles were intercepted by the air defence, four reached the target). Since mid-December, the vocational school had been home to the 14444 regiment of mobilised soldiers. An ammunition depot had been located on the same site, which exploded following the attack. According to the social sphere, there were about 600 people in the building. Confirmed casualties are around 70. The clearing of the rubble continues. Casualties are estimated at up to 110 and over 100 injured. There is loss of documents and communications, as well as breakdown in control.

The Russians promise an internal investigation to establish responsibility in light of the serious inefficiencies that led to the Ukrainian attack: the same local military leadership on 12 August allowed Ukrainian artillery to hit the command post in the control building of the Leninskaya mine. Intelligence information about the impending New Year’s Eve attack also went unheeded; now the Russian military prosecutor’s office intervened.

Also on 2 January, the Russians attacked Ukrainian depots in Očakiv. Artillery units of the Russian Armed Forces hit Ukrainian positions on the coast of the Dnieper estuary in Očakiv. The targets were warehouses near a boat pier. Given the proximity of the facilities to the mooring and the easy access to the water area of the bay, it is very likely that the infrastructure was used by the 73rd Maritime Special Operations Centre of the Ukrainian forces. In recent months, there had been the active involvement of Ukrainian reconnaissance teams on speedboats to monitor the situation on the Kinburn peninsula. There are no casualty figures among the Ukrainian formations.

In the Soledar direction at 12 noon on 2 January, fighting was reported in the vicinity of Bachmut and Soledar. The Ukrainians are trying to hold back the advance of the Russian Armed Forces and intend to conduct a reconnaissance in the industrial zone to determine the first line of defence of the Russian Army.

In the Bachmut sector (Artemivsk), Ukrainian forces of the 57th Infantry Division attempted to retake positions on the south-eastern outskirts of Bachmut. The attack was repulsed and the Ukrainian formations retreated with losses. The 57th Brigade via social media released information on the heavy losses suffered by the 17th compound battalion: only 100 men remained. On 16 January, the 17th OTRB, which had previously withdrawn to Kostyantynivka, will be disbanded and the personnel transferred to other units. It is not possible to verify the information at the moment.

In addition, the formations that had previously operated in the direction of Kherson arrived in Chasov Yar. The transferred units will become part of the 57th Infantry Battalion of the Ukrainian Armed Forces after a short harmonisation period.

The assault on the AFU stronghold of Klishchiivka, held by combined units of the 24th and 63rd brigades and the 57th Infantry Battalion, continued in the south-west. During the fighting, Russian forces established control of another stronghold. Engineer detachments of the 28th Army Brigade are equipping a second line of defence near Ivanopllya, in the event of a breakthrough of the Klishchiivka line.

In the Soledar sector, assault units of PMC Wagner are advancing on Soledar from the direction of Bachmut and Yakovlevka. Active fighting has resulted in the Russians taking two company strongholds and five observation posts of the 128th OgshbR and 61st Brigade of the Ukrainian Armed Forces.

At the same time, the advance towards Rozdolivka and Vesele continued. To deter the offensive, Ukrainian engineering units set up minefields in the centre of Vesele, while artillery crews fire at the southern outskirts of the village and at Yakovlevka.

According to the Russian social sphere, Ukrainian National Guard units will be deployed from the Sumy region to Bachmut to compensate for losses. In Kostjantynivka, the distribution of diesel generators donated by the US as part of military aid has begun. 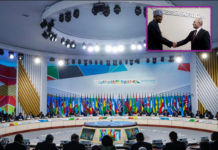 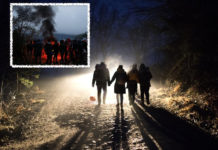 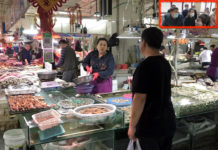