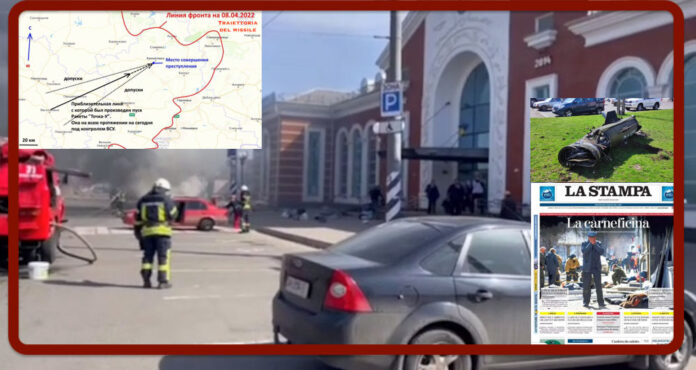 As in the years of World War II, it provides for the possibility of immediate delivery of military equipment to Ukraine with deferred payment. During World War II, the loan programme led to the mobilisation of the US economy to provide huge supplies of materials needed for the war.

The US will now seek to rapidly establish logistical systems to ensure a steady flow of military aid to Ukraine. Stocks of military equipment will be established on the border with Ukraine for further transport across the border. Reinforced NATO units on the front line, meanwhile, will keep member states safe and prevent Russia from cross-border attacks.

In Ukraine the war continues and while in the Russian social sphere the Slovak S-300 PMU system is seen crossing the border into Ukraine by train, the debate of the day on 8 April focused on who bombed the Kramatorsk train station.

The Ukrainian side immediately announced the bombing of the station by Russian Iskanders, said Oleksiy Arestovych, Zelensky’s military adviser, but photos of the fallen rocket tail, taken by local residents, appeared on the net. After that, Zelensky already writes that it was an attack carried out with a Tochka-U missile, launched by the Russians, but the latter do not have such missiles. Ukrainian officials are no longer talking about the Iskander.

According to the footage, it is a ballistic missile. Moreover, according to some international analysts, if you look at the Kramatorsk railway station, you can see that it was the entrance on the western side that was hit and the tail of the rocket indicates that it came from the southwest. The trajectory and range of the missile seem to indicate that it took off from territory controlled by the Ukrainian armed forces.

Finally, according to the Russian Defence Ministry, the missile originated from the missile division of the Ukrainian Armed Forces from the area of the Dobropolye settlement, 45 kilometres south-west of the city. The Russian Defence Ministry statement reads: ‘All statements by representatives of the nationalist regime in Kiev about the “missile attack” allegedly carried out by Russia on 8 April at the railway station in the city of Kramatorsk “are a provocation and are absolutely false”. The Russian armed forces had no firing missions on 8 April in the city of Kramatorsk and they were not planned. We would like to stress that the ‘Tochka-U’ tactical missiles, fragments of which were found near the Kramatorsk train station and published by eyewitnesses, are used only by the Ukrainian armed forces. On 14 March 2022, a battalion of the 19th separate missile brigade of the Ukrainian Armed Forces attacked the centre of Donetsk with a similar Tochka-U missile, as a result of which 17 people died on the spot and 36 other civilians were wounded’.

On 14 March, for those in Italy who were unable to follow the events, there was an attack by Ukrainian forces on the city of Donetsk. The attack ended up on the pages of La Stampa, by mistake, which put the photo of the attack on Donetsk in the following days talking about the Russian bombings in Ukraine. The head of the separatist Donetsk Oblast Pavel Kirilenko reported in the 13:00 bulletin on 8 April that: “As a result of a missile attack on the Kramatorsk railway station, 39 people were killed, 87 wounded. Many of the victims are in serious condition.”

In Kramatorsk, a referendum for independence from Kiev was held in 2014, as in the entire Donbass. In fact, for Kiev, the Donbass is not populated by Ukrainians but by Russians. Just as they bombed Donetsk on 14 March, they may have decided to attack Kramatorsk. Answers are awaited.

What is certain is that bombing a civilian railway station means restricting escape routes from the city and blocking humanitarian corridors. And slowing down the evacuation of the population. Who benefits from this? Who uses the population as a human shield? Above all, an evacuation that leads in the direction of Russia and not the West. Evacuation towards Russia that the Ukrainian Vice-Premier calls “deportations”.

Eduard Basurin, Ukrainian, official UNM representative of the DPR, on the attack in Kramatorsk said: ‘The Ukrainian authorities announced the evacuation a few days ago. People started to gather in some places: the best option was the train station and then a rocket was launched. They thought that no one would see and be able to take pictures of the remains of the Tochka-U munitions, on which there was an inscription in Russian ‘For the children’. The very fact that this type of weapon was discovered in Kramatorsk suggests that it was the Ukraine’.

Finally, it should not be overlooked that on 8 April, Ursula von der Leyen and the head of European diplomacy, Josep Borrell, arrived in Ukraine. 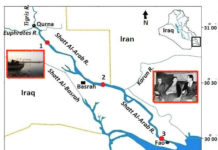