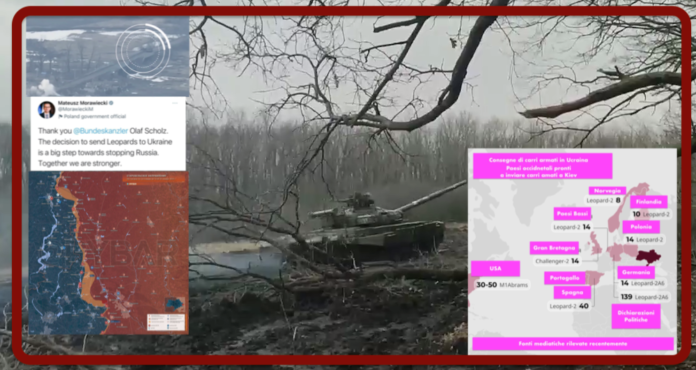 “Ukraine will go on the offensive in Crimea two months after being supplied with tanks,” reported Ukrainian Army General Mykola Malomuzh. “This will make it possible, with tanks, to launch an offensive in the direction of Donetsk and along the entire southern corridor, including Crimea,” Malomuzh said. He noted that the timing of the offensive depends on how quickly the military learns to use the new equipment.

These words were echoed by those of the Russian Foreign Ministry released to RIA Novosti. “Hybrid warfare is underway against Russia, discussions about ‘red lines’ are a thing of the past”.

The spokesman for the President of the Russian Federation, Vladimir Putin, Dmitry Peskov told the press: ‘There is no prospect of reaching diplomatic ways to resolve the situation in Ukraine at this time. The situation in Europe and around the world is extremely tense and the policies of the US and NATO do not bode well – with the doomsday clock approaching midnight-. Kiev’s statements on possible attacks on Russian cities are a confirmation of the correct path chosen by Russia and its intentions to protect the country from this danger. Russia is not in contact with Germany in light of possible deliveries of Leopard tanks to Ukraine’. And he also announced a meeting of Putin with Duma leaders in February.

Ukraine’s President Volodymyr Zelensky dismissed the heads of the prosecutor’s offices of five regions of Ukraine: Zaporizhzhya, Kirovohrad, Poltava, Sumy and Chernihiv. And again, Ukrainian Defence Minister Oleksiy Reznikov said bluntly during an interview that Ukraine is fulfilling NATO’s mission: ‘Today we are fulfilling NATO’s mission, without the loss of their blood, with the loss of our blood, so that they waste their weapons’.

These few agency launches make it clear that Russia is preparing for a maxi offensive on Ukrainian territory, and Ukraine wants to attack Crimea but to do so it has to wait for weapons that are not there.

From the front it is learned that Stormtroopers from the ‘Storm’ squad of the ‘Twas’ group are preparing for frontline combat. They are volunteers of the ‘Storm’ squad being trained in a firing range in one of the regions of the North Ossetian military district.

Their mission is to break through the most difficult and entrenched areas of the Ukrainian fighters’ defences. The stormtroopers learn movement tactics during small arms combat, the suppression of sniper firepoints and bunkers using hand grenades, anti-tank grenade launchers and small arms under conditions of visual contact with the enemy. They also learn proper medical care, drone control, military topography and communications.

And while everyone in Europe is focused on the Leopard 2 yes or Leopard 2 no debate, the Russians have sent images of the active movement of armoured vehicles towards NATO’s eastern border to the social sphere, which is being recorded simultaneously in different regions of Europe. In particular, a train loaded with Bundeswehr Leopard 2 tanks is observed in Germany itself, heading east. Many observers attribute this activity to plans to transfer the tanks to Ukraine. According to media reports, Berlin and Washington could announce the delivery of tanks to Kiev as early as 25 January, triggering a chain reaction in other countries. Polish Prime Minister Morawiecki stated on social media on 25 January: ‘Thank you, Olaf Scholz. The decision to send the Leopards to Ukraine is a big step to stop Russia. Together we are stronger’.

The Pentagon does not want to supply Abrams to Ukraine because of the risk of the tanks falling into the hands of the Russian military, Sky News reported. The paper’s columnist Mark Stone writes that the tanks are of paramount importance to the US military and therefore should in no way fall into the hands of the Russian military. In particular, M1 Abrams tanks are highly sophisticated and full of manufacturing secrets, including a combination armour with depleted uranium mesh that is difficult to penetrate. “A tank is the tip of the army’s spear. If it is destroyed and left on the wrong side of an advancing enemy line, its secrets are compromised,’ Stone explained the Pentagon’s concerns. It should be noted that US troops maintain and destroy damaged tanks if necessary. However, Ukrainian forces cannot be expected to act accordingly. Moreover, these vehicles run on aviation fuel, which is not always available in Ukraine.

Peskov commented that ‘the Abrams burn like all tanks’ and several military analysts on the social sphere have reported that these vehicles are not at all suitable for combat on Ukrainian territory, having been developed to move in dry, desert terrain. However, according to CNN, Kiev might receive the Abrams tanks not earlier than a year.

It is reported from Ukrainian sources that the Commander of the Ukrainian Armed Forces Valerij Zaluzhny and the Pentagon are asking Premier Zelensky to start withdrawing troops from Bachmut so as not to find themselves in an operational encirclement.

On the front line, the evening of 24 January saw a slowdown in the pace of the Russian advance. The Ukrainian Armed Forces gathered their reserves and intensified their resistance, showing the most active nodes. From dawn on 25 January, the Russian artillery was busy stopping and suppressing this resistance, while the infantry reorganised. Russian losses are much lower than on the first day of the offensive in Pavlovka, but there are still no results. The Ukrainian troops were hit in the sectors of the front line, and retreated ‘behind the fortress walls’ of the mine communications almost inside Vuhledar. The fighting continued.

Starobil’s’k direction updated at 14:00 on 25 January 2023. There are no significant changes in the Kup “jans’k sector. Both Russian and Ukrainian artillery are shelling the other side’s positions and strongholds. Targeting is provided by UAV calculations and mobile reconnaissance groups with helicopters.

One of the attacks by the Russian armed forces against a Ukrainian deployment site in Kup “jans’k resulted in 27 dead and more than 50 wounded. The Ukrainian 14th Brigade Command is in the process of replenishing the brigade force with mobilised personnel. In addition, artillery firing positions have been set up north of Dvorichna. It is likely that there will be an increase in shelling on the areas bordering the Russian Federation in the coming days.

In the Svatove area, at least 30 units of Ukrainian heavy armoured vehicles arrived from Kup “jans’k and Borovoy in the direction of Svatove, probably from the 66th Shadow, one of whose battalions had previously been reported to have been transferred. The accumulation of such a large number of weapons in one area indicates the preparation of the Ukrainian formations for active operations in the Kuzemivka area.

Mutual shelling continued in the Liman sector. Much of the territory from Makiivka to Dibrov is still in the grey zone.

However, over the past few days, Russian Armed Forces fighters have managed to dislodge Ukrainian DRGs from the area south of Kremenna and entrench themselves near the Seversky Donets River, improving the tactical situation. 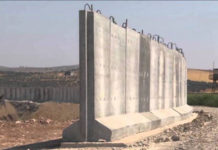