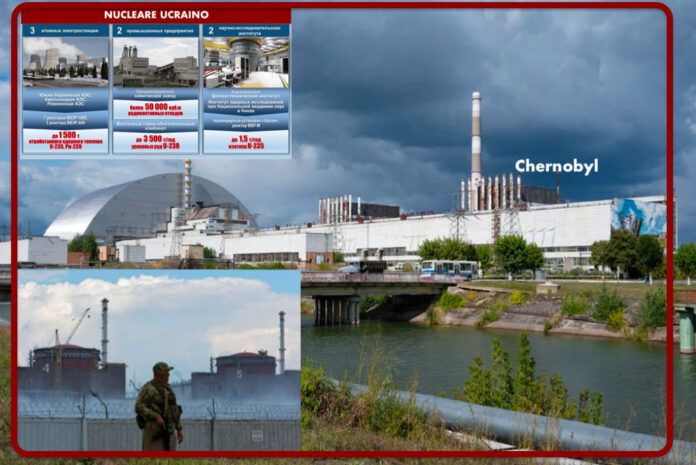 Kiev’s military commissar, Yuriy Maksimov, declared on 24 October that all conscripts in Ukraine under the age of 60 must take part in the mobilisation. He did so in an interview with TSN when he specified that the Ukrainian army must be ‘resupplied with men’ and that the mobilisation will continue.

Apparently, therefore, the so-called reconquest of Kharkiv, Kherson, and now the Crimea, is not a walk in the park. The eight months of war are also exhausting Ukraine in terms of military forces. Then, in a month’s time, the results of the attacks on Ukraine’s critical infrastructure will begin to become apparent, Ukrainian regions will be cold and dark as winter begins.

And while Ukrainians reckon with continued mobilisation, the concern within and outside the Ukrainian borders is the possible use of the ‘dirty bomb’ for the Russians by the Ukrainians and vice versa.

According to the Russians, ‘work is in its final stage’ and ‘employees of Zelensky’s office have secret contacts with Britain for the transfer of nuclear weapons components to Kiev’.

And while the Russians talk of a Ukrainian ‘dirty bomb’ comes Zelensky’s interview with CTV and CBC in Canada (Canada is the third most populous country in the world) in which he states that if his office is hit, ‘the world must respond with a [nuclear] attack on the decision-making centre in Russia’.

The US, UK and France refused to believe that Kiev could use a ‘dirty bomb’, according to a joint statement released by the US State Department: ‘The defence ministers of each of our countries spoke with Russian Defence Minister Sergei Shoigu (…) the countries made it clear that we all reject Russia’s claims that Ukraine is preparing to use a dirty bomb on its territory,’ the document reads.

From Russia, Sergei Naryshkin, director of the SVR, replied that the world must not allow Kiev to possess nuclear weapons, because ‘it is unacceptable’ and also added that Russia is very concerned about the West’s rhetoric on the possibility of using nuclear weapons.

According to Rosenergoatom’s number one, the detonation of a ‘dirty’ bomb would lead to the radiation contamination of tens of thousands of people and would ‘extinguish’ areas from life for up to 50 years, Rosenergoatom said

On 24 October, eight months after the start of the Russian attack amid heightened tensions over the possible use of a dirty bomb, Russian presidential spokesman Dmitry Peskov specified in a speech that there are no plans for Putin to hold talks with Macron or Biden and that Kiev’s threat to use a ‘dirty bomb’ is real and it is up to the US, UK and France to believe it or not.

Ukrainian Foreign Minister Dmytro Kuleba says the IAEA director decided to send experts to Ukraine after Russia claimed that Kiev had built a ‘dirty bomb’. “In a conversation with Director General Rafael Grossi, I officially called on the IAEA to immediately send experts to facilities in Ukraine, which the Russian Federation falsely describes as sites for the development of a “dirty bomb” (Vostochny GOK and the Kiev Nuclear Research Institute). He agreed. Unlike Russia, Ukraine was and remains transparent. We have nothing to hide,’ Kuleba wrote.

At 13:12 on 24 October, the Ministry of Defence of the Russian Federation alerted forces and assets in case of a ‘dirty bomb’ detonation by Ukraine and a Russian Defence Ministry briefing on the threat of nuclear weapons use in Ukraine followed. Russian Foreign Minister Sergei Lavrov: ‘Russia intends to raise the issue of Kiev’s preparation of a ‘dirty bomb’ at the UN’.

Russia possesses about 4,500 nuclear warheads, about 2,500 are stored in its submarines, while 2,000 are stored on various territories of the Russian Federation. But perhaps not everyone knows that Kiev could actually produce a dirty bomb because it would have the means.

In fact, there are nuclear industry companies in Ukraine with reserves that could be used to create a ‘dirty bomb’. There are three operating nuclear power plants: South-Ukraine, Chmel’nyc’ky and Rivne with nine spent nuclear fuel storage pools containing up to one thousand five hundred tonnes of uranium oxide enriched to 1.5%;

At the decommissioned Chernobyl nuclear power plant with storage facilities for radioactive waste, 22 thousand spent fuel assemblies containing uranium-238 are stored, as well as products associated with the operation: uranium-235 and plutonium-239, which are the main component of a nuclear charge.

More than 50 thousand cubic metres of radioactive waste, which can also be used as components for a ‘dirty bomb’, can be accommodated at the newly established radioactive waste processing enterprise ‘Vector’, at Prydniprovsky Chemical Plant Ukraine’s Uranium Heritage, at the radioactive waste disposal sites ‘Buriakovka’, ‘Podlesnyy’ and ‘Rozsocha’;

The Eastern Mining and Processing Combine extracts uranium ore in two out of three mines with a capacity of up to 1,000 tonnes per year.

There is also a scientific base in Ukraine: the Kharkov Institute of Physics and Technology, whose scientists took part in the USSR’s nuclear programme, where various experimental facilities currently operate, including the Uragan thermonuclear facilities, as well as the Institute for Nuclear Research at the National Academy of Sciences in Kiev, where research is carried out at the WWR-M reactor using high activity radioactive materials.