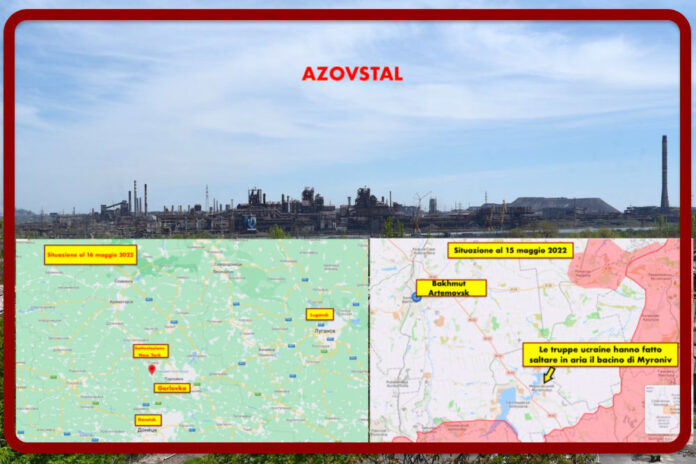 According to Russian and Ukrainian social sources, on 16 May, the surrender of the military still present in Azvostal began, where, according to the Daily Express, there are also three former British special forces soldiers.  However, the bombing of the plant continues.

In the meantime, it is reported that the beaches of Odessa have been barred to citizens because of mines planted in the sand by the Ukrainian military forces to prevent the Russians from landing by sea. Ukrainians expect a landing by the Russian Black Sea Fleet. After a failed attempt to capture Snake Island by the Ukrainians in recent weeks, attempts by the air force and UAVs of the Ukrainian armed forces to attack Russian positions and ships in the island area have resumed. Further intensification of naval and air battles over the strategic island is expected.

The most active front on 16 May was undoubtedly the Donbass: Seversky; Bakhmut, Adviikva where the Russians are trying to create yet another cauldron. That is, the encirclement of Ukrainian troops who are then forced to surrender in the absence of weapons, fuel and food supplies. These days the village of Nikolaev in the Kherston region has been reduced to starvation.

In Ugledar. Heavy fighting continues in the area of Novomikhailovka and Ugledar. The Ukrainians continue to hold defences and key points on the Maryinka-Kurakhovo highway.

Bakhmut. Starting on 13 May in Bakhmut, the command of the Armed Forces of Ukraine attempted to strengthen the regrouping in order to prevent a Russian breakthrough in Popasna, which then fell to Russian forces. As of 14 May, news spread on the social sphere that Ukrainian troops in Bakhmut had installed themselves in flats and houses and were living there in groups of no more than 5-6 people, abandoning the school buildings targeted by Russian shelling. On the same day, the Defence General Staff of Ukraine stated: ‘In the direction of Donetsk, the Russian army is concentrating its main efforts on preparing for offensive operations in the direction of Severodonetsk, Soledar and Artemovsk (Bakhmut). To this end, two battalion battle groups have been moved. There are assault actions along the line of contact with the support of aviation and artillery’.

Russian troops recorded successes in the Avdiivka area. Also according to Ukrainian sources, on 15 May, with the prospect of abandoning the front at Bakhmut and Avdiivka losing Popasna, the Myroniv reservoir was mined and blown up to prevent the advance of Russian forces from the south.  At present, water threatens to flood several settlements.

In the morning of 16 May, the Russian social sphere informed that the army aviation was bombing Ukrainian positions in the Avdiivka area with Ka-52 helicopters.

According to Donbass social sources, the Ukrainians suffered heavy losses in Avdiivka and the Maryinka area. As for the LPR, there are militant losses in the Lisichansko-Severdonetsk region. The encirclement or cauldron is also in operation in Severodonetsk in the direction of Artemovsk (Bakhmut) battles are ongoing. The road to Bakhmut in several sections is already under the control of the Armed Forces of the Russian Federation and the LPR. The Russians reportedly hit a military facility in Bakhmut.  It is believed to be an industrial complex in Siniat.

In Avdiivka the Ukrainian armed forces are holding out in the north. The Russians took Novoselovka-2. The Avdiivka-Konstantinovka highway was cut. The Avdiivka supply now passes through Orlivka. Troits’ke was then taken, and the Russians entered Niu-York south of Nelipivka. 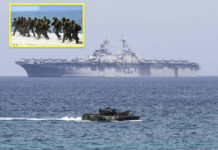 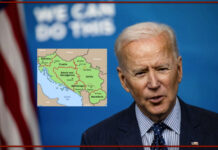 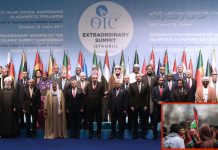