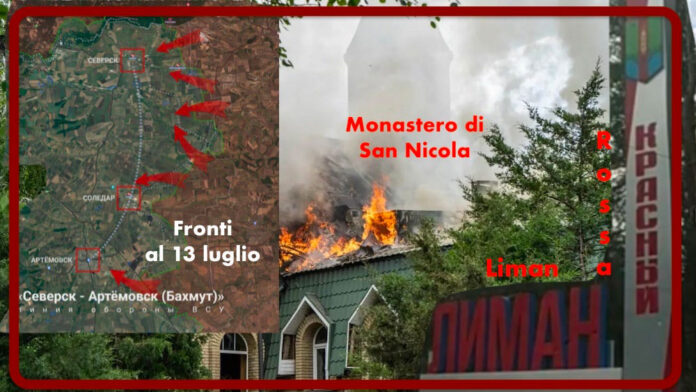 Updates from the front at 11am on July 14th.

Active combat operations are underway on the Seversk-Bachmut line. Overall, Russian and allied forces managed to defeat Ukrainian positions and destroy Ukrainian unit personnel in the forest belts near Seversk. The artillery of the DNR and the Russian armed forces is continuing its advance on the Bachmut-Solidar-Seversk line of defense. The map shows the main directions of attack of the Russian units-DNR.

The Kiev formations try to slow the advance of the Russians and allies. They suffer heavy losses, but continue to “saturate the defense” with reserves. Foreign mercenaries and Western military specialists, who oversee the use of American and European artillery systems, remain active near Soledar and Seversk. Ukrainian tactical drones operate in the area. The use of Switchblade 300 ammunition for bombers was again recorded.

The efforts of the Russians and their Ukrainian allies in the Donbass are aimed at approaching Sloviansk and Kramatorsk from the north, east and south. The pace is negatively affected by the shortage of UAVs and other means of reconnaissance. The Russians captured prisoners near Slavyansk. The military said they ended up at the front after two months of training.

According to local accounts, Kamianka was taken by the Russians (there is no video evidence yet); the city is located near Avdiivka. The Donetsk-Konstantinovka highway passes through Kamianka, offering the Russian and Donbass forces the opportunity to approach the Ukrainian Avdeevka grouping from the north-east. This, in turn, means that it will not be only long-range artillery that will be used to penetrate Ukrainian strongholds. The Ukrainian counterattack near Kamianka was therefore unsuccessful. Now the conflict has moved to the outskirts of Soledar.

Fighting continues on the outskirts of Seversk. “Operational control” over Seversk is claimed, but so far some key hills in the city area are still under Ukrainian control, and the Seversk-Soledar highway has not yet been cut, although it is exposed to artillery fire.

Finally, the Ukrainians of Donbass rescued nuns, elderly disabled children and children who had taken refuge in the monastery of St. Nicholas, after the city Vuhledar had ended up in the middle of the conflict. The monastery was also attacked by the Ukrainians. Since spring, the Nikolskoye Monastery has become a refuge for hundreds of inhabitants, novices and religious. People hid from the Ukrainian army bombing from Vuhledar in the deep cellars of the church and other monastery buildings.

Red Liman has appeared in Liman now under Russian control. The correction is fixed at the entrance to the city. 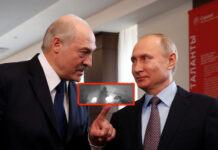 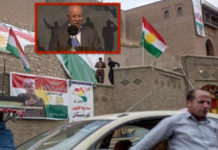